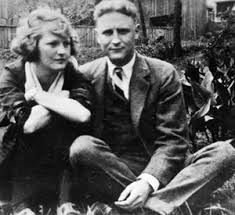 "Oh, Francis, Francis, Francis, you have been dead 73 years and yet..you have never been so alive."  F.Scott Fitzgerald died at age 44.   Booze and a bad heart took him early.   Depending on the time of the day and the flow of traffic I will find myself stuck at a red light near the apartment where Fitzgerald died.   I often think about how he picked his apartment at least the legend goes because it was close to the Garden of Allah, a famous watering hole.    Bees should never live on a rose.  The pollen will collapse them.

Anyway, the movie Great Gatsby is out and I have now had two friends tell me that they enjoyed it. I was a bit surprised since it has not gotten the best reviews.  But evidently something is in there that is interesting because my friends are not easily moved.   Hmmm.  I may have to see it.   In the meantime I found a great article by Jude Comwell about Fitzgerald's chart and along with his famous wife Zelda.  Star crossed lovers for sure.   Wow, that is a understatement.


The Natal Chart of F. Scott Fitzgerald and the Roaring Twenties
by Jude Cowell
My friend Julie Demboski’s analysis of today’s entry of Venus into Mercury-ruled Gemini Talkity Talkity Talkfills us in on what and where we may expect this social energy to express.
And of course, one of the signs related to writing, Gemini, is the sign of F. Scott Fitzgerald’s natal Pluto (13:43 Rx) and his imbibing Mars-Neptune conjunction (20:38 and 20:18 Rx, respectively.) As you probably know, Fitzgerald ruined his health by years of drinking alcohol (and possibly taking other drugs–I don’t know) with Mars signifying energy and action and Neptune ruling all forms of negative escapism.
Another ‘writing’ indicator is his Mercury-Venus conjunction in arty Libra @24:48 and 23:12, respectively. Between this conjunction and natal Sun @2Lib18 in the 8th house of Debt and Death lurks asteroid Bacchusand ‘bacchanalia’ is one way to describe the lifestyle and drunken parties of Scott and wife Zelda (born Zelda Sayre July 24, 1900 Montgomery, AL.)
This post will end with a view of a horoscope of the ‘Roaring Twenties’ Solar Eclipse of 1923 (16 North Saros Series = ‘inspiration; creativity; illumination’ and it repeats on November 3, 2013!); click chart to read a few basic details. The Eclipse fell into Scott’s 7th house of Partnerships and Marriage and I imagine the drinking and dancing became even wilder for it! Its material-released-from-the-unconscious influence must have inspired his writing as well.
Below is a view of The Great Gatsby author’s natal horoscope around which I’ve penned Zelda’s natal planets for noon since her birth time is unknown. During the 24-hour period of her day of birth, natal Moon in Cancer ranged from 3:35 to 16:24 making Zelda a Sun Leo-Moon Cancer personality blend of Fire-Water…steamy!