Prepping for the next eclipse and then the one after that.... 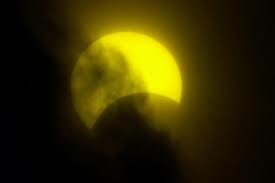 Because of the way eclipses work, we never only get one we usually get two or three in a row.   A week ago we had Scorpio Lunar Eclipse (April, 25 ) and now on May 9 (US) we will have Taurus New Moon which will be a Solar Eclipse.    Then at the end of the month on May 25 we will have another lunar eclipse.     I am humored that I am an astrologer and certainly know how to track the planets globally and personally.  But there are times when I get so busy managing our house, my son and what not that I lose track of what’s going on with my own chart.    Such was the case with the lunar eclipse.   If you would of told me I would see a house, make an offer and go into escrow all around the eclipse I would have said, “Huh, really?”  But then after it happened, I saw how it all made sense.
God knows, Taurus is about land and property and Scorpio is all about investments.   And  transiting Saturn is on my Scorpio North Node in the 7th house.   I’m already married. So, I couldn’t run off and do that commitment.   I’m already a mother.  Past the point of a second coming.    Saturn was looking for some kind of commitment.  And he found it—of course it was property.   Did anyone say, “Co-mingle investment?”   Perfect for my north node in Scorpio in the 7th with a big ol’ full moon lunar eclipse to give it all some gravitas.

Anyway, I will be writing about Taurus New Moon (Solar Eclipse) closer to the 9th but in the meantime I wanted to get you guys prepared.   This is eclipse Number 2.   My friend Carol and I have been discussing the third eclipse at the end of the May and that is the one that gives us a little bit of the heebie jeebies primarily because Neptune is in the mix.    While the gods have been focusing all our attention to Uranus and Pluto in cardinal Aries and Capricorn, no one has been watching Neptune and his dreamy sometimes delusional self messing around in his home sign Pisces.   He likes to hide in a fog and misbehave especially when no one is looking.  But come May 25th the light will shine on him and the crazies will be coming out.     All the more reason for us to get our act together on Solar Eclipse May 9th.   I will post my own take closer to the 9th.  But in the meantime here is a write up by ElsaElsa a gal so nice they named her twice.
Go to her link for more of her thoughtful astro write ups.
The Solar Eclipse (New Moon) takes place at 19 degrees Taurus in the early evening (US), on May 9th. It’s notable that all the personal planets (Sun, Moon,  Venus, Mercury and Mars) will be stacked up in one sign. This doesn’t happen very often!
Its also striking that there is just one square and opposition in the sky on this day. This will keep the noise and distraction to a minimum. I think it’s positive. Often, less is more.
The day is focused on the stellium in Taurus, opposing Saturn in Scorpio.  We’re sure to see some interaction here, with people going back and forth.  A person may attempt to  block, thwart, control, or oppress (Saturn) their love (Taurus) via manipulation (Scorpio), but they may also support, empower and reinforce their lover, or perhaps make a lasting (Taurus) commitment (Saturn).
One thing for sure, there will be no trifling exchanges on this day. If you’re going in, it will be for a pound, not a penny and there is likely to be pressure involved.
The word “pressure” has a negative connotation to many, but there are a lot of people who don’t move unless squeezed…I may be one of them!
As for pulling this all together, the word, “consolidation” comes to mind.   Think about consolidating your losses and your gains. I do think this is a day of reckoning.
Also, don’t forget to set your intention. I’d keep the word “permanence” in mind.
Want to keep up with your transits? Check out my deluxe, personalized transit report!
See what is coming up for all – Transit Watch
Posted by Tracy at 5:25 AM