Beatles on Ed Sullivan --The Launch of an Era 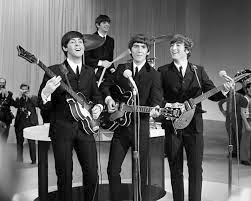 On Sunday February 9, 1964 at 8:02pm EST one small band composed of four British twenty-somethings stood on a stage at 53rd and Broadway and shook the world.

Fifty years later, The Beatles’ Ed Sullivan performance seems tame, innocent and something of a bygone which is ironic since it was that moment that was the shot across the bow and launched the era: The British Invasion.  Had there been no Beatles performance there would be no future rock and roll groups.   That is no hyperbole, google British Invasion influenced and you'll see a lengthy list.     Everyone has to thank the Fab Four for showing up that night.

When we look at the chart for the Feb 9, 1964 performance we see a strong placement on air signs.  The Sun is in Aquarius along with Mars and Saturn plus a Gemini MC (Placidus)

Air signs speak to thinking and communication.  Gemini is our neighborhood and the local gossip on our block.  Aquarius is our greater community.  On the chart, Mars and Saturn are in conjunction with the Sun.   Both local and greater communities were getting a lightening bolt.   In fact it is amazing The Beatles even heard themselves singing on the stage ---the raging Mars in the audience manifested through screaming girls was at an ear piercing pitch.

For those people who were ready to have their bell rung (which was primarily Post War Baby Boomers ) they heard the gong that night.    The Beatles may have been playing in NYC but those TVs in neighborhoods across the country were shaking 73 million viewers.   Reports are the very next day record stores and guitar shops were rushed by kids who got the message, “I want to be like The Beatles—They are cool.”   You can feel the Aquarius and Gemini.   Additionally, Jupiter the planet of things ‘foreign’ was in Aries in sextile to Mars and Saturn.   This was a foreign invasion that was approachable and easy to digest and given Aries likes to ‘break out’ the music was going to set a whole generation on a new path.
What is interesting in this chart and I think speaks to the part of the invasion that you don’t hear as much about is the Moon in Capricorn and the business of music.

What most people focus on is the British Rock and Roll and the invasion that followed,  The Stones, The Birds,  etc.  Along what was generated stateside.  Great music was born that day –but so was billions of dollars.    Think of all the musicians and bands who were inspired by The Beatles.  Almost none of them were inspired by the group because they had flown to Liverpool and saw them in a local bar or a bar in Hamburg Germany--They saw them on Ed Sullivan.   And the Moon was in super practical, business minded Capricorn.  In fact, the way The Beatles ended up on the show is a story that speaks of a practical producer that is Cap.

In 1963, Ed Sullivan and his wife were at Heathrow airport and saw a thousand screaming girls ready to greet The Beatles who had just arrived from Sweden.    Ed thought it reminded him of the same thing he had seen years earlier with Elvis Presley.   He tried to book the Beatles immediately on the show but it took some time with their manager.   When you read how the whole process unwound—you will see that it spoke to the chart of the actual event.

However, it was not until later that year that The Beatles’ manager Brian Epstein reached an agreement with Ed Sullivan to bring the group to America to perform live for the first time on U.S. television. Following dinner at the Hotel Delmonico in New York City, a handshake between the two men sealed the deal for performances on three shows to air in 1964. In return, The Beatles would receive $10,000 for their three appearances and top billing.

Prior to their debut on the Sullivan show, The Beatles’ record “I Want to Hold Your Hand” was leaked in advance of its planned US release to radio stations across the country. When attorneys for Capitol Records were unable to stop American DJs from spinning the tune, the record label relented and, on December 26, 1963, dropped the album ahead of schedule. The record sold 250,000 copies in the first three days. By January 10, 1964 it had sold over one million units and “I Want to Hold Your Hand” was the number one song on the Billboard charts by month’s end. In the weeks leading up to The Beatles’ performance on The Ed Sullivan Show, Beatlemania went viral. Radio stations played the band’s music nearly non-stop; teenaged fans sported “Beatle” wigs, and bumper stickers across the country warned, “The Beatles Are Coming.”

The Beatles touched down at New York’s Kennedy Airport on February 7th, 1964. They were met by a throng of reporters and a hoard of three thousand screaming fans. Upon disembarking the plane, The Beatles were whisked to a press conference hosted by Capitol Records in which they playfully answered questions from the media.

When asked “How do you find America?” Ringo Starr jokingly replied, “Turn left at Greenland.”

Of course I’m positive no one knew that the Moon would be in Capricorn trine Uranus & Pluto when they booked it for Sunday Feb 9th.   But of course we can now see how this invasion was going to generate bushels of money.

And what of the music?  Look no further than Venus in Pisces in the 7th house sextile Mercury.   This placement is long on charm.  This was not complicated tunes speaking of difficult subjects.  It was light and breezy and about simple love.  This was not the Beatles of the late 1960’s, this was the Beatles who wanted to have fun and not be so serious.
And for a nation that had just buried a president shot down by a Lee Harvey Oswald,  Venus in Pisces was a soothing balm.

What an extraordinary era they brought to us that night 50 years ago. 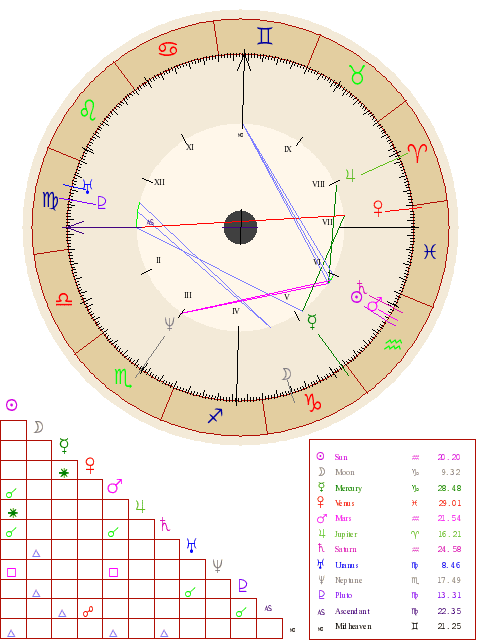