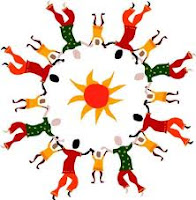 Last year I read a story posted on one of my favorite sites by a very thoughtful contributor. She posted it right around the time Jupiter was wrapping up his original pass out of Pisces. And for me there was something about the story that was evocative of the painful part of Pisces. Although, Jupiter is considered the great benefic planet and brings good fortune, he is big. And sometimes big is not better. For many people, while Jupiter has been transiting Pisces for the last year it could have expanded the weepier, more sensitive and perhaps fearful tendencies. And maybe amplified clinging to the past or pain. Now that Jupiter is about to leave Pisces (and soon Uranus's move out in March) this would definitely be the time to abandoned attachments to pain. Thus, this story of "Moving the Circle" may call to you in more ways than you know. Where are you in the Circle? Where are others in your life? Do you need to move it? I thank WuWei for allowing me to repost here.


After I read the book, Daughters of Copper Woman by Anne Cameron, if I was "stuck" on a problem, it was almost like I could "feel" the women's circle moving away from me - I would realize what I was doing, and then I would make myself do something else, and it would always help. The rub comes when you are telling your friends, or family members, about the story and why you are acting the way you are.

"Daughters of Copper Woman" is an amazing book, and I still have my same copy from 20 years ago. The back flap says it is a "retelling of Northwest Coast Indian myths shared by a few loving Native women of Vancouver Island...it is most treasured for its shining vision of the social and spiritual power of women." Add it to your wish lists!

"Sometimes the women warriors would meet without the men, to sit in a circle and talk women talk, and if a woman had somethin' botherin' her, or puzzlin' her, or scarin' her, or makin' her feel uneasy, she'd say what it was. She could take all the time she needed to talk about it, but it was expected she'd have put some of her own time into findin' the words and not talk in circles, endlessly, takin' up everyone else's time.

Then the other women in the circle who had maybe had somethin' the same happen in their lives would talk about it, and about what they'd done, or hadn't done, or should have done, and sometimes out of it would come an answer for the sister with problems. And even if not, sometimes it was enough to just have been heard and given love.

It was expected that besides just talkin' about what was botherin' you, you'd *do* somethin' about it. Usually it's better to *do* almost anythin' than let things continue if they're botherin' you. But sometimes the best thing you can *do* is nothin'. Sometimes you have to wait for the right Time before you can do.

A woman would come to the circle as often as she needed, but the circle wasn't there to encourage a woman to only talk about her problems. The first three times you came with the same story, the women would listen and try to help. But if you showed up the fourth time, and it was just the same old tired thing, the others in the circle would just get up and move and re-form the circle somewhere else. They didn't say the problem wasn't important, they just said, by movin', that it was *your* problem and it was time you did somethin' about it, you'd taken up all the time in other people's lives as was goin' to be given to you, and it was time to stop talkin' and *do* somethin'."
Posted by Tracy at 9:18 PM