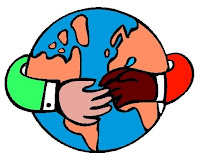 I was watching the Sunday Morning Political shows today and This Week's opening segment was an interview with three Senators (Hutchinson (R) Conrad (D) and Lieberman (I) who have announced that they will NOT seek re-election. This of course is not news unto itself but for me I saw the Astro angle immediately. There they were being asked to be on the show and talk about their history of working in a Bi-partisan manner. They talked about what it is like to find the middle ground. And of course they are ....leaving. Can you feel Saturn?

All of this taking place while we have Saturn transiting Libra. Libra is the sign of compromise finding the middle ground. It is NOT the sign of Fringe. It is that bridge right smack in the middle. Saturn will be in Libra until 2012 so we have a lot of work in front of us.

And on Tuesday Saturn will turn retrograde, on the same day of the State of The Union. We'll certainly hear a speech filled with Bipartisan comments, why not, we have had it in every speech since Whigs were in party.

But what will it really look like? I don't know. But I can tell you, Saturn in Libra and with Pluto in Capricorn the issues we have are so big that they will only be solved by both parties working. Can they do it? I dunno. It is probably going to get rough before it gets better especially when Uranus moves into Aries in March. As we know Uranus is not subtle so we should expect something this spring or summer that will be a great and big that gets our attention. In the meantinme we need to see what Jupiter generates in the next couple of weeks since Jupiter moved in Aries on Saturday.
Posted by Tracy at 9:57 AM