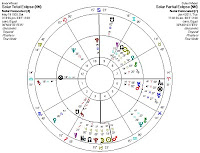 Over at Mountain Astrologer's website, Mary Plumb has a thoughtful write up on the activity going down in Egypt. Once again, a Saturn return, even when it is a chart of an administration can be rough.


Events in Egypt are moving quickly as Cairo is flooded with people in the streets demanding the resignation of President Mubarak. He has been President since October 14, 1981 when he took over leadership of the country after the assassination of Anwar As-Sadat. On that day, Saturn was at 14º Libra, with the Sun at 21º Libra and Pluto at 24º Libra. It is a Saturn return for his administration as his regime appears to be in a downfall and his family has fled the country. It is also a Saturn return for the horoscope of modern Egypt, set for June 18, 1953. (1)


Go to link for full article.


Additionally, David Crook on his StellarInsights Has put up Honsi Mubarak's chart. Mubarak is a Taurus with Moon in Pisces however, David has put up a relocated chart for Mubarak based on the eclipse that occurred 15 days after his bith.