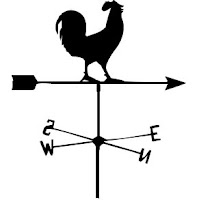 On March 3, the north and south nodes will move out of Capricorn and Cancer and into Sagittarius and Gemini. This will bring in a whole new energy and one that I would normally welcome but before it gets, welcoming it is going to get 'interesting'. And I put that in quotes because it is more like the Chinese proverb, "may you live in interesting times" kind of interesting.

Everything going on in the Mideast speaks of Uranus getting ready to break out of Pisces and into Aries. Can't spell Unrest without the U in Uranus. But strangely as North Node moved into the Zero Capricorn and started to head for Sag (yes, the nodes go backwards) it too is supporting the need for changes. Great, fiery changes. I remember the last time the North Node was in Sag was in between 1992 and 1994 and that brought in Big Bill from Little Rock. What is the next two years going to bring us? Heck it already feels like a three ring circus soon it will be three ring Cirque Du Soleil. Which is of course circus squared.

With the nodes the desire is to push us towards the North. It is harder but it is what we need to do. When 9/11 took place the north node was in Cancer which put the emphasis on home and family and away from business and career. And as I have said a jillion times here, almost everyone who died on 9/11, died at work. Didn't we all hug our loved ones a little harder on that day? When hurricane Katrina blew in the north node was in Aries. Weren't we all desperate for Aries leadership?

For the last eighteen months we have been processing North Node in Capricorn where we are desperate for responsibility and god knows, tightening the belt which is total Capricorn.

I will be curious to see what it means financially for North Node to go into party animal, lamp shade wearing, spend thrift "Honey, it is steak tonight!" Sag.
But besides the money flowing, (and more to the point) Sag, is truth telling living the truth and being in the truth. Which for many people is easier said than done.
The challenge is to avoid doing the opposite (Gemini) which is intellectualizing and rationalizing everything. It will all make sense in your (little) mind but in your gut you know how you are spinning it. Telling the truth is a pain but NOT telling the truth will hurt a hell of a lot more. And this includes finding the Truth in Religion. Aren't their universal truths in all of them?

Look back at your life to 92-94 and see where you were breaking free, getting out and stretching, perhaps you even moved to a new location. How were you being real and true? And how were you misbehaving? How were the little white lies? And above all---were you caught up in Cheap Talk?!!!
Posted by Tracy at 5:26 PM