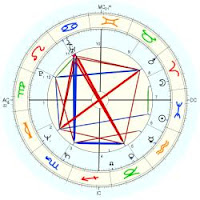 What do we know?

We know Mr. Jobs was a Pisces, we know he was brilliant (typical Pisces), we know he had Moon in Aries, dear lord his temper was somewhat legendary and we know that he was born with Jupiter conjunct Uranus in Cancer. That probably speaks more to the Steve Jobs that WE all know more than anything.

Uranus rules technology and Jupiter rules Big. Can we get any bigger than Apple?

I mentioned to a friend that the technology of Apple and how it changed the world is just a hair short of Man getting on horse for the first time. World altering for sure.

Astrologers have written about Steve Jobs for years. Here's a discussion on the old Lois Rodden site that goes into the ins and outs of his chart but if you google you will find tons.

My own thoughts about the chart are more about us, than him.

What does it mean to lose the head of a visionary company at this time? This is what I am pondering. We are heading into extraordinary times between Uranus and Pluto and new technology will certainly be at the forefront. Will something collapse and a new technological solution must be found? Will industry desperately need a new solution under dire circumstances? With a Pluto square the word 'dire' is not an overstatement.

There is a lot in front of us and Steve Jobs will not be there. I can't help but recall back in May when Mark Haines (CNBC) died and I wrote about the Solar Eclipse
in Cancer and what was surely going to be a rough economy this summer. I had such a pit in my stomach that we would not have Haines to call some shots as he saw them.
Similarly, in spring of 2008, Tim Russert died and every astrologer on planet earth knew what we had in front of us in terms of the US general elections and Russert would not be there to call it the way he saw it.

All of this is to say, I think we will have a vacuum in 2012 with Jobs gone. He was not a broadcaster like Haines & Russert so it is not about him calling the shots but more about how he would have lead his company to solutions.