Maya how you spin 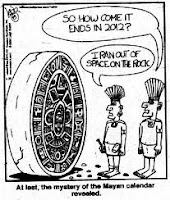 We know that we are in a bumpy period, astrologically speaking, from 2008-2016 for sure. Some of it more intense than others. But what is new about that? The 1930s were loaded with some of these same aspects as was the 1960s and yeah, it might be a bit more intense now but I can't see how it means the world is ending.

A few months ago the December/January issue of Mountain Astrologer was dedicated to 2012. Many of the articles about the real astro connections to 2012 said the same thing that I felt, life will go on whether we want it to or not! Lol.

Anyway, here is a bit of the ANS article. Go to the link for the whole thing.

To get more precise, this passage of the winter solstice Sun can be more narrowly focused on the crossing of the galactic equator (approximate midpoint) which occurred in 1998, the tangent to the dark rift in the Milky Way (~2012 +/– decades at least) or the transit over the ecliptic position of the galactic center (a couple centuries from now). See how much is uncertain here? I would identify this as a serious, unresolved timing problem, central to the basic thesis of 2012 as an end-date.

Intriguingly, Mesoamerican cosmology talks of five creations, this concept recorded graphically in the Piedra del Sol of the Aztecs which indicates the present creation is the fifth or last section of the full cycle. Using this fact, we could take another leap and say the end of the Long Count could be seen as the end of the precession cycle that began roughly 25,800 years ago. OK, what happened then, the last time the Mayan Calendar came around? I have read that it was around that time that humans used up all the easy-to-catch turtles for food and were forced to work harder for meals. But if that was really the case, it was most certainly something that didn’t happen in one day. All we can say for certain is that one precession cycle ago the Earth was deep in the grip of an 85,000 year long ice age that began to melt 5,000 years later.