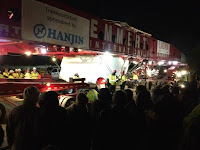 What is that above?

That is a 340 ton rock. It is in a rock quarry in Riverside which is a town outside of Los Angeles. Last night it was put on a truck and will begin its journey to Los Angeles County Art Museum (LACMA) where it will be a part of a permanent installation called "Levitated Mass." This project has been in development for years and one of the biggest hurdles is ----The route. There are a bunch of towns between LACMA and the rock quarry and not all of them will do the work, (take down street lights, telephone cables, etc) to allow this gynamorous rock on their roads. So, it will be a circurtious route of 110 miles and will take 11 days to get to its destination.

So, why am I putting a story about moving a giant rock here?

Because my Sun conjunct Saturn in Sagittarius loves this story!

How to move it? What happens to the roads? What about bridges? Only goes a few miles a day? What a weird route! I am all about this one!

The extra boon for me is that I live not too far from LACMA so I think I will go over there for the final arrival. Although, I beilieve there will be quite a crowd when the rock arrives!
Posted by Tracy at 7:00 AM