A Story Made for Today 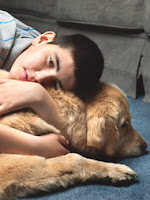 This morning I was reading the NYTimes and I found myself drawn to an article entitled "Wonder Dog". As I read the story about the boy adopted and the problems that slowly started to emerge which pointed towards fetal alcohol syndrome I could feel the big astrological move for today--Neptune in Pisces. The boy's adopted parents were heartbroken but still committed to their son and tapped all resources to help him. The father is a rabbi and his congregation had words of encouragement "He's all boy" but slowly they too had to admit there was something wrong. Several painful years later, the mom has an intuition, a strong feeling goes through her that their son would benefit by a dog--a service dog. The father was way resistant to bring in a pet but the mom would not give up this strong vibe inside her. This was new territory for the service dog world-- Children with Fetal Alchol Syndrome have not been recipients for service dogs. What Chancer the dog did for Iyal is a loving, tender and inspiring story. And double downing in the tenderness story, is the fact that Chancer had been dumped by a family before the service dog agency picked him up and trained him to take care of people.


Read this story and you will see the Pisces and the Neptune.

In May 1999, Donnie Kanter Winokur, 43, a writer and multimedia producer, and her husband, Rabbi Harvey Winokur, 49, beheld the son of their dreams, the child infertility denied them. Andrey, a pale dark-eyed 1-year-old in a cotton onesie, held in a standing position by a caregiver, appeared in a short videotape recorded in a Russian orphanage. If the couple liked the little boy, they could begin the legal process of adopting him. They liked the little boy very much.

Four months later, the Winokurs flew to Russia from their home in Atlanta to adopt Andrey, whom they renamed Iyal, and to adopt an unrelated little girl two days younger, whom they named Morasha. All four appear in another orphanage video: the beaming new parents on the happiest day of their lives, the toddlers passive in the arms of the strangers cradling and kissing them. In August 1999, the family arrived home to congratulations, gifts and helium balloons.

the story continues on the link.
Posted by Tracy at 7:32 AM