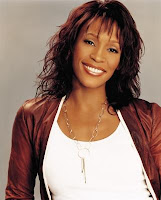 I was not familiar with Whitney Houston's chart before today. Kind of sad to look at a chart for the first time after they have died. I didn't draft it. David Crook did a nice write up on her chart. She was a Leo (no kidding) with Moon in Aries (no shit) and Virgo rising and Uranus in the 12th house and Pluto in the first is so apparent. The demons were great. Truly.

ETA: Correction. Thank you to the reader who correctly pointed out to me Whitney had Pisces Asc. I went too fast that day and even though David laid out the solar return chart carefully when I went back to post I misidentified Whitney's Asc as Virgo. That was the Solar Return for Beverly Hills place of her death. I was off my game. Pisces of course speaks to her musical talents. I have got to slow down with Mars in Virgo--Clearly!

Go to David Crook's for his write up on Whitney.
Posted by Tracy at 6:00 PM