An Ice Age gift from a long dead squirrel 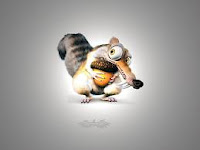 Yesterday a story appeared in the NYTimes which is perfect for the rich fantasy world of the Pisces lunar cycle which begins today.

A seed was found in an ice age squirrel's burrow that has been scientifically hocused pocused into a living plant. If it turns out to be legitimate this plant was last seen about 32,000 years ago in the Siberian tundra. Apparently the squirrel who gathered the seed put it in his little cubby in the permafrost which acted like a nice refrigerator and kept it from going bad in the summer. Little did that squirrel know that it would pop up as a plant on some scientist's desk in Russia thirty thousand years later.

Consider it my Fat Tuesday gift to you.

“This is an amazing breakthrough,” said Grant Zazula of the Yukon Paleontology Program at Whitehorse in Yukon Territory, Canada. “I have no doubt in my mind that this is a legitimate claim.” It was Dr. Zazula who showed that the apparently ancient lupine seeds found by the Yukon gold miner were in fact modern.

But the Russians’ extraordinary report is likely to provoke calls for more proof. “It’s beyond the bounds of what we’d expect,” said Alastair Murdoch, an expert on seed viability at the University of Reading in England. When poppy seeds are kept at minus 7 degrees Celsius, the temperature the Russians reported for the campions, after only 160 years just 2 percent of the seeds will be able to germinate, Dr. Murdoch noted.

The Russian researchers excavated ancient squirrel burrows exposed on the bank of the lower Kolyma River, an area thronged with mammoth and woolly rhinoceroses during the last ice age. Soon after being dug, the burrows were sealed with windblown earth, buried under 125 feet of sediment and permanently frozen at minus 7 degrees Celsius.

Some of the storage chambers in the burrows contain more than 600,000 seeds and fruits. Many are from a species that most closely resembles a plant found today, the narrow-leafed campion (Silene stenophylla).

Working with a burrow from the site called Duvanny Yar, the Russian researchers tried to germinate the campion seeds, but failed. They then took cells from the placenta, the organ in the fruit that produces the seeds. They thawed out the cells and grew them in culture dishes into whole plants.

Go HERE for whole article.
Posted by Tracy at 10:00 AM