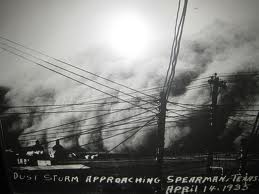 When my husband and son are busy doing stuff that I don't have to do with them (thank you, lord) I sometimes find myself poking around in places that I might not normally end up.   Case in point, American Experience: Surviving the Dust Bowl   was in my DVR and since I had a little free time (no "mommy do this, mommy do that") I decided to watch it.    Wow.  It was impressive.   Just when I think we 21st century Americans are having tough times now, well we have got nothing on those people in the plains states during the dust bowl.

If you don't know about the Dust Bowl, it basically was Texas, Oklahoma, Eastern Colorado and Eastern New Mexico.   Around the turn of the last century railroad speculators joined up with land speculators and promoted these states to immigrants and farmers from other states.   The plains had never been farmed until then and  the people arrived and did as the land speculators said, "turn the soil over and farm."  During World War 1 it was a ocean of wheat everywhere.  Beautiful.
Unfortunately, the farmers were not educated in soil conservation they were turning over land that had not been tilled in a thousand years.   And then in 1930, the climate changed.  Drought hit.
And all that land that has been tilled for the last handful of years was now parched.   Winds picked it up and turned the dirt into dust clouds.  Hideous black dust storms over took small towns and even cities.   People in Chicago, NY and Washington DC had the dirt of Colorado flying in their eyes.

The impact is like a shovelful of fine sand flung against the face,” Avis D. Carlson wrote in a New Republic article. “People caught in their own yards grope for the doorstep. Cars come to a standstill, for no light in the world can penetrate that swirling murk…. The nightmare is deepest during the storms. But on the occasional bright day and the usual gray day we cannot shake from it. We live with the dust, eat it, sleep with it, watch it strip us of possessions and the hope of possessions. It is becoming Real. The poetic uplift of spring fades into a phantom of the storied past. The nightmare is becoming life.” 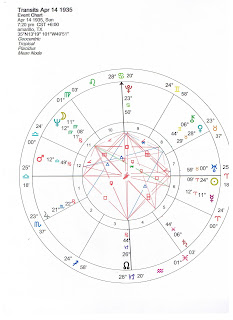 In the chart,
Moon conjunct Neptune in Virgo in 11th.   A community of farmers nightmare for sure.
Mars in Libra in the 12th house oppose Mercury in Aries in 6th.  It clearly felt like the end of the world.
Sun in Aries conjunct Uranus 6th/7th  Aries Square Pluto in Cancer 9th:  Hot, dry, black, the worst day of all
All that 6th house energy speaks of land and soil.
Curiously, Jupiter in the 1st house in Scorpio trined Pluto in Cancer in the 9th, a positive aspect.  What?  Where is the positive?

That was the storm that broke people.  After five years they had enough.  After that Sunday many people packed up the jalopy and headed West.    They moved their families to a new life in California filled with hope and promise.      John Steinbeck would write about that move several years later in Grapes of Wrath.

And even more important, that storm reached Washington DC.


When the Black Sunday cloud reached the east coast, it made the American government more aware of the soil erosion problem. As a result, the Soil Conservation Act was passed the same year, 1935.
Read more at Suite101: Black Sunday Dust Storm on April 14, 1935: The Worst Black Blizzard to Strike the Great Plains | Suite101.com http://maureen-k-fleury.suite101.com/black-sunday-dust-storm-on-april-14-1935-a120873#ixzz1u6dLEQOb

That soil conversation act sent government officials to the dust bowl and showed the farmers new way to farm which saved the soil.  It took a few years but it was that effort along with the rains that finally ended ten years of dust.