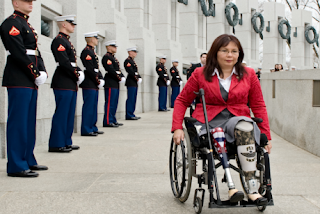 I have been out all day and I went to bed before I could post.
But for all of you people who did not hear, Tammy Duckworth won the congressional race.

As  you know I made this one issue personal.   Thank you who all helped contribute to her race.
I'm so proud of our efforts.    ---Tracy

Freshman Republican U.S. Rep. Joe Walsh was defeated Tuesday by Tammy Duckworth, his Democratic challenger in Illinois' 8th congressional district.
With 80 percent of the unofficial vote tallied, Duckworth led Walsh 55 percent to 45 percent. The race was initially called by NBC. AP has also called the race for Duckworth.
"I am so humbled to be elected representative of the 8th Congressional District," Duckworth told supporters in suburban Chicago Tuesday, the Chicago Tribune reports.
In an emotional concession speech in front of his supporters, Walsh said he "lost a battle. And you all know me well. I put every bone I’ve got into this battle," according to the Chicago Sun-Times.
The volatile race between Walsh, a Tea Party favorite, and Duckworth was one of the nation's most closely watched congressional battles. Nearly $6.6 million in outside spending was reported in the contest, including $2.7 million worth of ads attacking Duckworth poured into the race by conservative super PACs in recent weeks.
Polls leading up to the election showed Duckworth holding at least a 10-point lead over Walsh as both campaigns went intensely negative in the race approached its conclusion.
Walsh repeatedly attacked Duckworth, an Iraq War veteran and double amputee, for speaking "too much" about her military service and implied that she wasn't a "true hero." He also attracted national attention last month when he stated that he was opposed to abortion, including in circumstances when the life of the mother is at stake.
Duckworth, for her part, went negative in an ad released late last month that criticized the Illinois congressman over $117,00 in back child support this ex-wife alleged he owed in a now-settled lawsuit. Walsh brought his children into the matter as his 25-year-old son Joe Jr. appeared in a television ad urging Duckworth to pull the "deadbeat dad" ad from the airwaves.