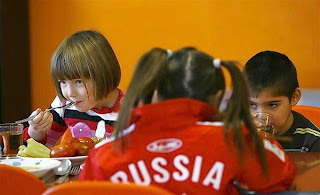 I could not help but see the full moon in the latest news out of Russia.

MOSCOW (Reuters) - President Vladimir Putin signed a law on Friday that bans Americans from adopting Russian children and imposes other sanctions in retaliation for a new U.S. human rights law that he says is poisoning relations.


The law, which has ignited outrage among Russian liberals and child rights' advocates, takes effect on January 1. Washington has called the law misguided and said it ties the fate of children to "unrelated political considerations."It is likely to deepen a chill in U.S.-Russian relations and deal a blow to Putin's image abroad.

Children?  Children in orphanages?  Children with special needs?  Can you see the Moon in Cancer?   Can you see Sun opposite in Capricorn?   Did someone say, "deep chill?"

Pro-Kremlin lawmakers initially drafted the bill to mirror the U.S. Magnitsky Act, which bars entry to Russians accused of involvement in the death in custody of anti-corruption lawyer Sergei Magnitsky and other alleged rights abuses.

The restrictions on adoptions and non-profit groups were added to the legislation later, going beyond a tit-for-tat move and escalating a dispute with Washington at a time when ties are also strained by issues such as the Syrian crisis.

Very sad move by punitive Putin.
Posted by Tracy at 7:55 AM