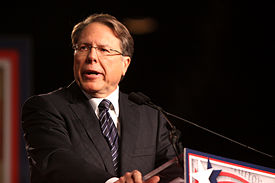 Today at 11:02am Wayne LaPierre, executive vice president of the NRA fought for the rights of mass killers to use any weapon that want in the United States.


Forget the fact that Columbine high school had armed sheriff deputy on duty and we know how that turned out.   And there was a good guy with the gun, (security) in the parking lot in Tucson.   How did that work out for Gabby Giffords and the people killed including the 9 year old girl?

Then Wayne got to the bottom line--- He is opposed to laws banning 100 round ammunition round (Aurora) , 30 round (sandy hook), assault weapons or access to ammunition.  No speed bumps to slow down mad men.

And in what can only be the most callous move of all, he sat up there and smugly said "the media calls semi automatic rifes machine guns.  They tells us the .223 round is one of the most powerful calibers.  When all of these claims are factually untrue."

Wow.  He is going to quivel with members of the media because there might be something more deadly?  The fact is that those bullets hit those small 6 and 7 year old children at 3 times the speed of sound and 26 people were killed in less than 10 minutes.    Can he stoop any lower?

We don't exactly know where Wayne was born but if we take a stab and guess Roanoke VA, and per wikipedia his birthdate is November 8, 1948.

Taking this into account, he has Sun in Scorpio and Moon in Aquarius and I am going to guess he DEFINITELY has a square between his moon and sun.    His Venus is at 8 degrees of Libra which at this time is getting an opposition from Uranus and a Square from Pluto.
No shit.

Forget the Mayans, forget the fiscal cliff, Wayne La Pierre is singlehandedly taking his four million NRA members off a cliff. And every politician that the NRA backs and who does not burn their NRA membership card after today deserves to go off that cliff.

If you have not heard your senator speak against these mobsters called the NRA and Wayne LaPierre than you know what side they are on.    In my mind, they are on the side of evil.