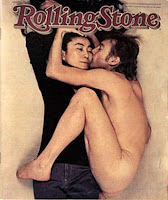 With so many choices to get news I find it interesting when one story crosses all media. For example I found some stories in cyber news but not a word of it on television. And I have seen stories in print that I see no further information on television or the web. But then there are stories so hot that they explode in all outlets. Of course they are usually salacious stories, like Governor Sanford crying over the hot Argentine girlfriend that his mean constituents made him dump. He’s a Gemini by the way. And then stories like Michael Jackson’s death which was steeped in intrigue and weirdness that everyone had to get more of it. He was a Virgo with Sun conjunct Pluto by the way.

And then there is a story like Annie Leibovitz which is all over the media. If you do not know the story, Leibovtiz had a huge payment due for a humongous loan. She put up the rights to her photo library and put up her extensive and expensive properties as collateral. Whether she was going to make the final payment or not was covered by reporters like a sportscaster calling an NBA game. The stakes were high. Would she lose her entire catalog of photography and houses or would she make the payment?

I won’t bog us down with Leibovitz’s chart (Libra Sun—Moon in Aquarius) since we don’t know her birth time. But what I find intriguing is that this story originally broke last year (2008) as we began to build towards the first opposition between Saturn in Virgo and Uranus in Pisces. Pisces rules photography and Saturn in Virgo is disciplined worker. Her photography is voluminous-- proof of her disciplined work ethic.

Uranus moves at its own pace and marches to its own beat and as much as it is about rebelliousness it is also loaded with glamour. Curiously, if no one knew Leibovitz work until this lawsuit they would see the Uranus in Pisces aspects of her art--- glamorous subjects in most unusual photographic settings.

As for her finances, Pluto in Capricorn seemed to be lurking in the background because all news reports indicated that she had a big IRS debt to pay. Pluto rules IRS and debt and of course, Capricorn is about responsibility. It is this IRS debt which did not bring the best in people. Especially on the 2nd and impending 3rd pass of Saturn and Uranus opposition. I have seen many a blogger comment on the fact she should just shut up and just pay. Many people were furious that the media even carried the story. “Who cares people about her--people are losing their homes every day!”

And although, I am not as harsh as those people, I did scratch my head a bit, like, “Huh, her money is a problem, how did that happen?” But again, going back to the Saturn Opposite Uranus, Pisces is the onion of the astrological garden. Once you peel it you find another layer.

And in Leibovitz’s case, I have seen reports that her debt is due to the death of Susan Sontag (her long term girlfriend) and an inheritance tax that would not have existed had they been allowed to marry.

This is coincidental (if I believed in them) since her situation first came to light as we were building towards the first pass of Saturn and Uranus which took place on November 4th which was the same date that in my state that Proposition 8 was passed---killing same sex marriages. And now as we get ready to have the 3rd pass of Saturn and Uranus opposition, Leibovitz was able to successfully renegotiate her debt. She was able to stave off the creditors. At least for now. What will come when Saturn opposes Uranus next Spring and Summer? I dunno. We will have to ask a peeled onion.