And speaking of weird winds..... 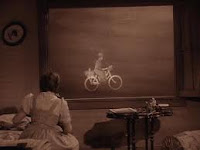 As we know, Massachusetts got a tornado on this Gemini New Moon. Proof once again never underestimate the power of wind. But metaphorically, the air signs stir up a lot of talk and rhetoric. And with this moon it is magnified I believe by the eclipse and North Node in Sag. Sag has got a lot of politics in it (along with Capricorn) and I thought it was interesting that Sara Palin drove up the east coast causing her own tornado of media. And when she blew into Trump Tower for pizza with Donald--well those tornadoes in Joplin seem to pale in comparison by what these two Media Supernovas stir up.
And if that was not enough, somewhere in the mix but still on Gemini New Moon Mitt Romney officially throws his hat in the ring as a presidential candidate.

And this is only the first four days of Gemini, we have got 24 more days to go---hold on to your hats, everyone! It is going to get blustery.
Posted by Tracy at 8:37 AM