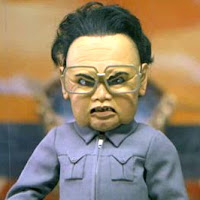 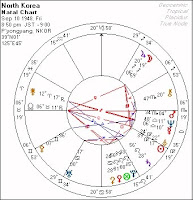 For over fifty years North Korea and its leaders have been an enigmatic force in the world. Hard to understand, complicated relations, discomforting action and of course cuckoo crazy policies. At its core, it as been a peninsula of mystery. And in that environment it is no surprise the chart of the country is also fuzzy. I went looking for the North Korea chart and found it at NeptuneCafe There is a lot of good data and research at the website, totally worth checking out.

Anyway, if we can sort through the fuzziness and take the chart and apply what is going on now astrologically, Kim Jong il's death is interesting. Uranus has been pushing for change with North Korea's natal Uranus for the last couple years. On the 10th of December Uranus turned around and began to move out of the tension and now is moving on into free space. Interesting Kim died in this space. If the chart is accurate the tension is between communication and neighbors (3rd) house and mystery, illusion, karma and hermit like behavior (12th). Uranus demands change, will there be change?

Jupiter which tends to be optimistic and jovial is about to oppose NK's Mars in Scorpio right below the descendant. Mars in that position speaks greatly to the debate that the world has with NK--"Are they a real threat or not?" In the next few months we'll see what is going on as Jupiter pushes the point.

Curiously, the transiting Sun was in a wide conjunction to the Moon and Jupiter of NK at the time of Dear Leader's death. This death could create an opportunity for change that is positive and actually could help the people of North Korea. Will it happen? Or will the son of lil' kim be as misguided as his father? Or will military leaders take over with their own agenda(I do wonder about that Jupiter/Mars aspect)? Hmmm. I dunno. But the accent on change is in the mix.

I hope for the sake of the starving people that things crack and the world can get in and do some good along with positive leadership change. It would be nice for them to finally let the cold war is over alarm clock wake them up. It has been ringing for a long time.

For gawdsake their neighbor China came out, isn't it time for them?
Posted by Tracy at 8:57 AM