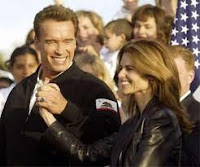 Maria Shriver has been on my radar since childhood. She is a handful of years older than me and in the 1960's and 70's when we were young, her family at least the Kennedy portion, was THE family of note in America. I remember when I heard she was dating Arnold Schwarzenegger I thought, "Huh?" Then of course I took a look at their charts and thought, "Oh, yeah, Leo & Scorpio, that is all about fighting and make up sex." Criminey, look at Bill and Hilary. Well, wait a minute it is best if make up sex is with your wife.

Anyway, Lynn Hayes has more on the former First couple of California. Go to the link for the whole thoughtful post.


Maria Shriver’s chart shows a Scorpio Sun in the sixth house of service and work; in fact, she has five planets in the sixth house revealing her deep commitment to helping others. With Taurus rising she avoids change wherever possible and prefers stability and financial security to a more transitory life. When Schwarzenegger was governor she rarely spent time in Sacramento with him but instead stayed in their home in Los Angeles.

Shriver’s Moon is in Leo, so there is a part of her that also needs the attention that Schwarzenegger seeks so easily. Her Moon conjoins his Pluto which generally shows an intense and powerful connection, although the Pluto person (in this case Schwarzenegger) often overpowers the Moon person who can feel left behind. His Saturn also conjoins her Moon which can feel confining but also protective. This is an important significator for marriage and commitment. The linkages between their charts is less powerful for him than for her which has likely made it easier for him to minimize the marriage if in fact that is what occurred.

Shriver’s progressed Midheaven is preparing to move into Aries – the beginning of a new 30-year cycle that will inspire a powerful motivation to find her own way in the world and develop a career in which she can play a leading role. Last year’s Chiron/Neptune conjunction transited her ascendant between May of 2009 and November of 2010 – a cycle which likely caused her to re-examine who she is and how she wanted to express her life


Read more: http://blog.beliefnet.com/astrologicalmusings/#ixzz1MR62lbYn
Posted by Tracy at 8:20 AM