Strauss: Perhaps next time you should just take the mint on the pillow 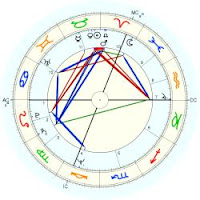 Yes, yes, yes...we who live in the US know a person is innocent before proven guilty. But I did have to take a peek at Dominque Strauss Kahn's chart.

I'm sure Dominique Strauss Kahn will have the best legal representation money can buy. Why not, this is the guy in charge of the international money fund. And those are the guys who loan money to countries when they are about to go belly up. Perhaps the IMF can loan Dominque the dough for his legal defense. However, I'm guessing he has got cash in deposits boxes all over Geneva. Especially given he is a Taurus. I double checked astro data bank for his birth information. They usually have good sources for there data so I'll go with it, which lists him as April 25 1949 11:10am (outside Paris).

With that information: Dominque has Sun in Taurus, great with money; bad with control issues. He has Moon in Aries, great with leadership; bad with anger issues and he has Leo Rising; great with *star* appeal, bad with Ego. Additionally, he has Venus in Taurus right on his Sun which probably has him loaded with some charm (although it might be lost on a lot of us) and that is another perk to his money making abilities. Or at the very least part of the reason why he is all about banks.

Now where things are interesting is when you look at the transiting planets. Currently Uranus is in conjunction to his moon (or at least close enough to count) and he is finding his world upside down. For the record, not everyone who gets these kind of charges when Uranus bumps up to their moon but seeing photos of him hauled out of a first class seat on Air France at JFK certainly speaks of the disruptive nature of Uranus. Curiously, Pluto finished squaring his moon last year and now is making a positive trine to his Venus. And Pluto is about to do another round of trines with his Sun. I gotta say, I am scratching my head on this. These are positive aspects and yet these charges are pretty formidable. I'm wondering if he has something in his pocket that is going to make this go away. Not the thing that got him in trouble but another thing in his pocket that will make all his troubles disappear. Pluto is fairly deft.
Posted by Tracy at 1:22 PM