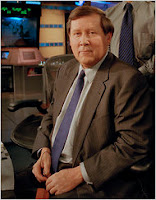 Yesterday morning I was busy and did not turn on CNBC which is my usual routine. My husband who also watches CNBC chose to watch a bike race on one of those silly sports channels . An hour later when I was at my son’s school waiting to have an appointment with one of the staff I got a text from my husband. It said one sentence. “Mark Haines died.” I almost fell over when I read it. I LOVE Mark Haines and his death was a hit to the solar plexus. I did not know Mark personally. I had never met him nor worked with him. However, in the last six months I have been telling my husband that I wanted to produce some segments and send them to him because I knew Mark would ‘get’ them. (For those who don’t know I have an extensive background in television.) But the bottom line, I was a fan of Mark like everyone else who watches CNBC –and his death is a HUGE loss. And personally I feel an eeriness around it. But before the eeriness a bit more about Mark.

One day about two years ago I was lying in bed watching Mark Haines “Squawk on the Street” and some CEO was blathering on about his company and what a beautiful shiny metal object it was and Mark just looked at him said, “ I hear you but I gotta say I don’t see it.” Right then, I said to my husband, “Mark has got to be an Aries.” Of course, I looked him up and sure enough Aries. Yesterday, all daylong his co-workers and peers spoke lovingly of Mark’s authentic nature and always calling it the way he saw it. No pretense. They also talked of what a masterful journalist he was and his coverage of 9/11 was superb. Remember, that was an attack on his peers and his backyard—Wall Street. Ironically I had just watched this coverage on YouTube about a month ago. His talent as a journalist speaks to his moon. I don’t know the time of his birth but if he was born after 9a he would have Moon in Sagittarius and having heard him long enough I can tell you every bone in my body says he had Moon in Sag. That combined with Sun in Aries explains his No-nonsense approach to everyone and also his great wit. He was smart, clever and had fun nicknames for everyone and his crazy appetite —this is all Sag. I loved when he had only one question for the new owner of the Mets when he was on the show, “When are you going to win?” Like I said, Sag Moon Aries Sun to me.
Now back to the eerie.

As some of you may remember I wrote a bit about the Cancer New Moon that is taking place on July 1. I have got my radar up on this one. And I believe that the roughness of that lunar phase is going to manifest economically. I think this it is going to get rough. QE2 is ending on June 30th and then this WONKY Cancer new moon happens the very next day with pressure on the cardinal planets---well, let me find the right word for it---- oh, yeah, that would be “YIKES.”
I have had my antenna up on this issue and in the back of my mind I thought, “Thank God for Mark Haines I can’t wait to see him guide us through the storm that is coming.” And then, Mark went and died.
When I read my husband’s text after the shock I had another thought, “It is just like Tim Russert.” Tim Russert was the host of Meet The Press for something like 20 years and then he suddenly died. And people felt about him like I feel about Mark Haines. Masterful journalist, knows his stuff and died too early. Mark was 65, Russert 58. But here is the important part---timing.

Russert died in June of 2008. The whole world changed by the Fall of 2008. Russert was not there for Sara Palin, The Stock Market Crash, the Bail out of Banks, Obama Presidency and tea partiers all within the first 9 months after his death---Lordy. By the way, the whole Tea Party Movement started on CNBC in Chicago with Rick Santelli’s famous mortgage bail out rant in Feb 2009.
And now, we have the upcoming summer with eclipses and tension and no Mark Haines? I can feel the similarity. Who will be our voice of reason when we hit the rough times? I dunno. I’m sure we’ll all make it through but god, I wish we had the guidance of Mark Haines. My condolences to his family and his family at CNBC and to all us who appreciated him like he was our friend and family. He will be missed by this little Sag over here. Sigh.
Posted by Tracy at 7:32 AM