Aquarius New Moon---Unique Solutions if you are willing 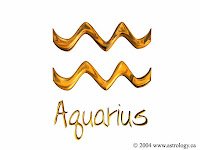 It almost killed me... (sick for four days) but I successfully put up the Aquarius New Moon Report. As always you can find the full report on Margaret Wendt's website here
It is a huge lunar cycle. With possibilities for good and for 'not so' good... cough, cough, if you know what I mean....here's a snippet of the report:

With this New Moon and Solar Eclipse we find, the Sun, the Moon, Jupiter and Neptune along with Chiron and the north node in Aquarius. Venus and Uranus are on top of each other in Pisces opposing Saturn in Virgo, which puts an additional spin on the hard work of compassion and help. Mercury and Mars are in industrious Capricorn along with the powerful mobster Pluto. Of the group in Aquarius, the Sun and Moon are holding hands with Jupiter and wherever Jupiter goes it expands and it can bring opportunities.

The last time Jupiter was in Aquarius was 1997 so you might want to recall any changes that took place then and if there is a recall this year. But more critical in my mind is the fact that the last time there was a Solar Eclipse conjunct Jupiter in Aquarius was January 1618.

Looking backwards, Jupiter provided some opportunity as a few months after
that 1618 solar eclipse Jews fleeing Europe’s inquisition settled their first
community in the New World (Brazil). Imagine how visionary it was for them
to do such a move. Thousands of miles by sea to this unusual new land. But also that year, sadly the expansion side of Jupiter was in effect when the awful slave trade expanded with the arrival of the first slaves to Jamestown. Why couldn’t there have been a visionary abolitionist in Jamestown? Or worse, perhaps there was someone who loathed slavery but was too scared to break status quo and say, “We are a free land no slaves here.” Imagine how that would have changed history. And six weeks after 1618 eclipse, excess zealotry another Jupiter by product ignited when Catholics
and Protestants began to war over whose church was better launching the Thirty
Year War. Again, where were the visionaries to say, “stop this madness?”

Clearly, we don’t have Solar Eclipses in Aquarius conjunct Jupiter often and given its history, I think we need to make sure we get on the right side of it. Can you find your unique voice? Can you break from evil status quos? Do you know how to stand up and suggest a different way?

GO HERE to read the rest