Gold, Anyone?--Perhaps now is the time? 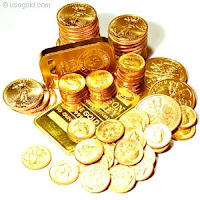 As many of you know, I am a big fan of Ray Merriman. Back in October I mentioned that I really appreciated his take on Pluto. Which surprise, surprise is all about the economy..cough, no kidding..cough. Anyway, last week I was watching CNBC as I often am, early in the morning and I was scratching my head as the market climbed and gold did not go down. This caught my eye because I have been watching gold all year and the pattern has been---the market drops and gold goes up.
The market goes up and gold goes down--When one goes up the other goes down. Of course, I know that is the rule (if there are rules on Wall Street anymore). But in my gut I have suspected that there will come a time when Gold will make its move up and it will not be tied to the market or the US Dollar. And it would have to do with Pluto's move through Cap. Let's face it, Pluto in Cap is about the "ring of a real nickle." And while a dollar is tied to all kinds of goofy things, oil up or down, real estate goes bezerk, a man named Madoff MakesOff with dough.. shoot, the wind blows 35 miles an hour ----it influences the dollar. But Gold..that is different because Gold is valuable on every continent. Gold has merit on its own. Gold is old. For heavenake, Gold is in the bible! Look at those words "Valueable" "Merit" "Old"...those are the words of Capricorn. So, if anything has a real ring, it is gold. And in my mind, that would make Capricorn sing. So I am venturing that Gold has begun to separate from the dollar and is beginning its long climb up. Even Merriman had a moment on it in this week's predictions:

As T-Notes declined (and interest rates began to rise), the Dollar predictably became stronger against other currencies. The Euro currency, for instance, has fallen from a high of 1.4719 exactly on December 18, to 1.3837 as of Friday. Strangely enough though (not really), Gold prices did not come down as the Dollar strengthened. Gold has made a new monthly high of 892 on December 29, up over $200 since its 680 low of late October. On Friday, Gold was still testing the 890 level, near its highest point of December 29.

You can read his whole take here. Anyway, I am not a financial advisor and I could not even play one on TV, but I think many might want to take a moment to consider diversifying and folding in Gold. If I was a betting person, I would guess it will be quite high in 2009.
Posted by Tracy at 10:34 PM