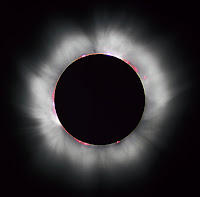 
Coming up on January 25 at 11:56pm PT, is the New Moon in Aquarius. And this New Moon is also the first Solar Eclipse of 2009. And in case anyone is counting there will be two solar new moons and four lunar eclipses this year. Wow. Normally we have four but not this year. Gee, why would there be anything remotely close to normal this year?

Of course, with anything having to do with Aquarius, and an eclipse is no exception, we are always asking ourselves, “Who is this group that I belong?” “Are we like minded?” “What is friendship?” “We don’t have to have the same opinions about everything, but we better have a common ground about something.”

As you can see that is significant in our personal life. But also, this eclipse is going to put an electrical charge in our group consciousness as whole. All of us will be ‘getting’ something from the ethers. Or perhaps we will be feeling a mental static electricity. I predict sleep patterns to be disrupted during that week.

The fact that Jupiter (and as always north node) is a part of this Solar Eclipse (conjunction) suggests there will be some expansive perhaps far reaching lessons. Who is putting themselves out there for the group? And why is it one guy? Shouldn’t it be more of us? Because in a solar eclipse, the moon is blocking the Sun this eclipse puts the focus on how we let our emotions get in the way of stepping up and reaching for our Ideals. Maybe emotionally we have not wanted to connect to a group or an Ideal and now we will see how that perhaps holds us back in profound ways.

The actual eclipse is only a few minutes long. But the energy of the eclipse colors the whole lunar phase and certainly the waxing period (up to the Full Moon), just in time for the Lunar Eclipse on Feb 9th. What there are two of them? Yep, where there is a Solar there is a lunar.

The eclipses this year are the following:

These eclipses will focus on groups, community and ideals, Strength and courage, responsibilities and infrastructure, family, emotions and feelings, and another round of community and ideals and the last one will bring up family and emotions, feelings again.

I would say that 2009 is all about love of community and building together to create a new family or sense of family.

One thing I find remarkable is that Barack Obama will be have been president for less than a week when the first eclipse of 2009 takes place and the fact that it is in Aquarius is very interesting. Aquarius is a ground breaker and Obama has certainly done that but I was listening to a channeling session by Kryon , (which might not be everyone's cup of tea) and he said something I had never thought before, that Barack Obama is the first Indigo to become president. I know most of us think of Indigos as being younger than Barack but I think there are some that come through ahead of the wave and certainly he could be Indigo. Of course, I thought –“How perfect for the Aquarius Solar Eclipse.”
Posted by Tracy at 11:22 AM