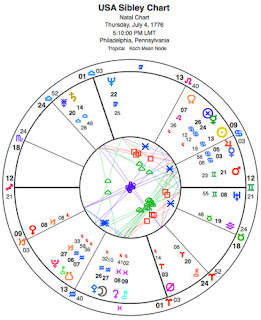 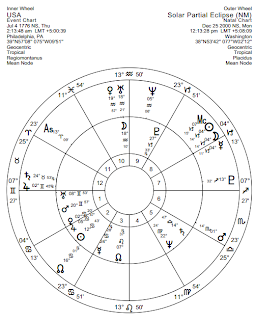 Two hundred and thirty six years ago a bunch of guys in tights and white wigs were angry.  We know the story, taxes, crazy King George, no representation, expensive tea, blah, blah, blah...bottom line a lot people were pissed off from Boston to Virginia in particular the colorful group hanging out in Philadelphia.   Finally on July 4th after weeks of hammering out their list of complaints,  Hancock  and friends signed The Declaration of Independence.   This is where things get interesting.  From Lynn Hayes

There are three major charts used by astrologers and many more minor charts. One is the Sibley chart which uses the date of July 4 1776 (signing of the Declaration of Independence) and a time of 5:10 pm, with Sagittarius rising. There are also Gemini rising charts and a few adherents to a Scorpio ascendant that some say is based on the fact that the clocktower on the back of a $100 bill was set to 2:22 pm. But if you look carefully at the image you’ll see that it could also be read as 4:10 pm and in fact Wikipedia says that the Department of Bureau and Engraving says that the time is 4:10 pm (although I could find no corroborating evidence for this).
Read more: http://blog.beliefnet.com/astrologicalmusings/2011/07/the-real-astrology-chart-for-the-usa.html#ixzz1zfEUW7jL

Ebenezer Sibly a British astrologer contemporary to those times drafted the Sag rising chart for the USA and is probably used more regularly than any other draft and is referred as the Sibly chart.   You see it posted above.

The Gemini chart which is below the Sibly chart is also used by many astrologers.   For many astrologers they take the major events of the United States history and see who they work against the Sag Rising vs the Gemini rising.   There are cases for both.  Of course in any of the charts there is one thing that does not change and that is the Moon in Aquarius.   How perfect that two events near each other make for perfect fodder for discussion on which chart is preferred.  The birth of the Internet and September 11.      Many astrologers used the events of 9/11 and how they line up for either chart and you can find tons of blogs in the world wide net explaining various opinions.    Here is one such discussion over at AstroTableTalk.


I've been comparing what seem to be the 2 main astrological charts used for the USA -the Gemini Chart and the Sibly Chart (which has Sagittarius Rising). They both seem to work well in different ways, particularly by transit. The classic example was the Saturn-Pluto opposition which was occurring in Gemini-Sag on 11th Sept 2001, and was aligned with the ASC-DESC axis of both USA charts. Pluto in Sag - fundamentalist terrorism. Saturn in Gemini - the twin (Gemini) buildings (Saturn) representative of America's achievements (Saturn). Isn't astrology eerily literal sometimes?

Go to LINK for full article.

I tend to use the Sibly chart but having said that I find all the other discussions very compelling.

This week when the horrible heat wave across most of the United States has been in the news I do wonder what the weather was like back in 1776?  Was it so hot it helped fray nerves and tempers?  Or was it cooler and they had more energy to write and rewrite and write and rewrite into the nights.  One has to wonder if Benjamin Franklin had invented an air conditioner they may never have finished the document.
Posted by Tracy at 7:42 AM