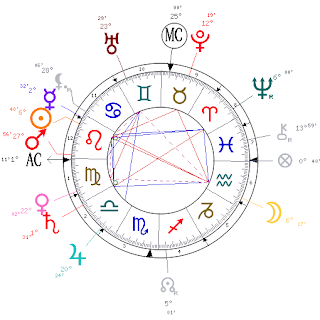 This week on American Experience, the subject was Henry Ford.   I was riveted by it.  A big idea guy, a producer who never wanted to be a part of the social elite.   He cared about the fellows who could talk machines and he didn't hang out with the elite millionaires.   His good friend was Thomas Edison which was interesting since he was barely educated (8th grade).  He also believed his own press and thought that those who worked for or with him and thought that they should worship at his shrine that he created--they are either worshippers or traitors.  He also knew how to manipulate the press.   And he took much pleasure in making it clear that he was running the show---he was also a major antisemite and god know who else he said awful things about.  Can you see his Sun in Leo oppose his Moon in Aquarius?       Yeah, me too.   Give it a watch.
Posted by Tracy at 10:02 PM