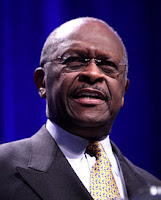 Herman Cain. Seriously, what is there to say? Except---- Sagittarius.

We don't know his time of birth, but he most likely has Moon in Aries. Really? Yah, think? And his Mercury is in Sag, which explains his casual, relax speaking that draws large crowds even when some of the stuff does not exactly make sense. To his fans it all makes sense, as in:

Oh, lord, where to begin? Don't bother, it's Sag, baby! And then there is the issue of late, the women and the inappropriate things that were apparently said which speaks to his Venus in Sag. Venus in that position likes to get out there and mingle (that is a word for it) and maybe they were said in jest. But given the lawsuits, those are some pretty expensive jokes.

But here is the part that I find most interesting about the whole last ten days since the stories have come out about the sexual harassment. Cain's numbers have not fallen, they have gone up and he raised more money this week, about half million dollars on Monday alone, than he raised in any other time during the campaign.

Bottom line is that Sag confidence, Aries independence and Sag mouthiness is very appealing to Independents and probably Libertarians. Those groups also respond well to Aquarius energy. And then maybe there are some Geminis who just like to keep the circus going who are paypaling camp Cain.

Where will this all go? I dunno. But he certainly has a lot of Sag luck on his side. Will it be enough?
Posted by Tracy at 7:15 AM