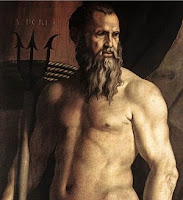 Neptune will be turning direct this cycle on November 9 at 29 degrees of Aquarius. For the last five months our insights and sensitive nature have been on high alert. Like a radar beacon, we have been feeling beeps and pulses from our higher source. Guiding us, leading us, perhaps scolding us. We have been feeling something.

Once it crossed back into Aquarius (summer) for the final time we have been doubling down with our groups, social circles, internet, computers and like minded individuals. No surprise to any astrologer that the tea party emerged during Neptune in Aquarius and no surprise now on the final months of Neptune in Aquarius, Occupy Wall Street has arrived.

But, what will happen to both groups after Neptune moves out of Aquarius the sign of social causes and moves into Pisces in Feb 2012 and will stay there until 2026. That is a long time of Pisces and here's the kicker, Neptune rules Pisces so he is very comfortable in his home sign. Pisces is the sign of humanitarian causes. One could say that social causes are humanitarian causes but you have to look closely. Aquarius is very intellectual and the theory of causes can motivate. But once Neptune moves into Pisces our psyches will shift and we'll really need to put the human back in humanitarian. Faces will be put to stories and we'll want to help the face, not the cause.

Pisces is also the sign of music, art, spiritual, mystical and delusional. The last time Neptune was here was in the late 1840’s, spiritual movements began to shape up. The Mormon church which was started earlier began to spread during Neptune's time in Pisces and it was then Brigham Young was made Governor of Utah Terroitory. Students in art institutions in Paris were finding their way, by the time Neptune would move into Aries those art students would turn into Monet, Renoir, Gaugin and the other greats of the Impressionist movement. What seeds will be planted during this passage of Neptune? What art group will begin to shape togehter? Will the delusional take leadership roles? Will we let them? Will reasonable people begin wearing tin foil hats? Or will our psychic abilities go up the nth degree? Will Gold be discovered again like it was in 1848? Who knows, but between now and February 2 we will work out the final actions of Neptune in Aquarius. It is interesting that Steve Jobs would die in these final degrees of Neptune in Aquarius. Is there anything more Aquarius than Apple?
Posted by Tracy at 6:50 AM