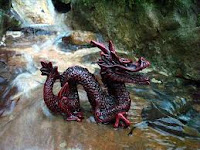 Special thanks to smart and savvy David Crook who had a link to an article in BBC News about the upcoming Chinese New Year. The Aquarius New Moon in Western Astrology coincides with the Asian New Year. I vaguely remembered it was dragon in 2012, but didn't realize it was Water Dragon. I say that like I know something about Water Dragons. I don't.
However, I am a fire rooster and whenever I read about it, I gotta say it sounds a lot like me.

Anyway, here's what is in store for all of us.

Here's a snippet. Go to BBC link for full article
In the Chinese Zodiac, 2012 is the Year of the Water Dragon - marking a year of transition, uncertainty and change.

The Asia-Pacific economies certainly face considerable uncertainty as well as headwinds in 2012, with the eurozone already sliding into recession at the end of 2011, while the momentum of US economic recovery - although encouraging in recent months - remains moderate at best.

The Year of the Dragon will also be a year characterised by political uncertainty, with presidential elections in the US and France, as well as leadership change in China.

In autumn 2012, the 18th National Congress of the Communist Party of China will elect the new Central Committee and Politburo Standing Committee members.

The current President Hu Jintao and Premier Wen Jiabao are due to step down from the Standing Committee to make way for the next generation of leaders from whom the new Chinese president and premier will be appointed in March 2013.

Despite the political and economic uncertainties facing the global economy, the Asia-Pacific (Apac) is forecast to continue to be the fastest growing region of the world economy in 2012, with growth rising to 5.3% from 4.5% in 2011.

This forecast is based on the IHS Global Insight central case scenario that the eurozone experiences only a mild recession in 2012, with gross domestic product (GDP) declining by 0.7%, while moderate positive growth continues in the US, at a pace of 2.0%.
Posted by Tracy at 4:18 PM