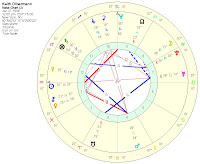 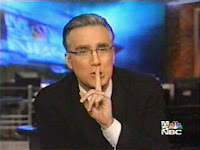 Today I saw a headline that made me finally go looking around for Keith Olbermann's chart. The headline said something to the effect "Olbermann at war with Current". I thought, "Again?" "What is his deal-e-o?" So, I went looking for his chart. Lynn Hayes did a thorough write up on him a few years ago and her chart is above.

We do not know his time of birth but he is an Aquarian. No shit, sherlock. He and his brethren Bill Maher and Sarah Palin are cut similarly. "I will say what I want when I want to say it." Of course, if you like what they say, you love them and can see them as a lightening rod (Uranus rules electricity) By the way, for those who are paying attention, Obama has Aquarius Rising and Rick Santorium has Moon in Aquarius. And the United States has Moon in Aquarius.

Anyway, the Aquarius energy in Olbermann is obvious. However because we do not know the time of his birth, we are not exactly clear on the degree of his Moon. But we know it is in Virgo. Moon in Virgo is a pretty much a perfectionist but unfortunately they give so much attention to the details that they miss the big picture. What exactly did Olbermann expect when he left MSNBC (in a huff) for the smaller Current TV? They don't have the resources, they can't serve in the same manner, 'get over it' and make the most of it!

I used to work not too far from Olbermann when he lived in Los Angeles and I would see him a lot in some of the same small restaurants holes near our jobs. I have to say, having stood next to him, he's quite tall-- I think he has Sag rising. Especially given he has a sports background and all that 'shoot from the hip' OPINIONs. Saturn in his first house makes sense. Work horse that he is and a few ego bruises.

Anyway, Mars, the warrior will be in Virgo until July and it will at some point be going over his moon. He is hunting for bear. Of course, the key would be to shift that rage energy into proactive energy on self, not on the executives at Current and see if he can retool himself so that he can play the 'long' game and not the 'short' game. This will be a big hurdle for him but if there was ever a year for it, 2012 would be that year.
Posted by Tracy at 8:37 AM