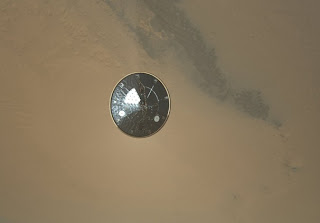 Well, our sweet little ol' Mars has been in the news of late.

On Sunday, a rover called Curiosity (love that name) about the size of a Hundai landed on Mars and he has been sending back to us all kinds of images.


Since safely landing Sunday night, Curiosity has dazzled scientists with peeks of its new home that at first glance seems similar to California’s Mojave Desert. The initial pictures were fuzzy and black-and-white.
Earlier this week, the rover raised its mast containing high-definition and navigation cameras that have provided better views.
“It’s beautiful just to finally see the colors in the terrain,” said Jim Bell of Arizona State University, who is part of the mission.
The car-size rover remained healthy and busy testing its various instruments. Several pebbles landed on the rover’s deck next to its radiation sensor during the final seconds of landing as it was lowered to the ground, but project managers said the stones posed no risk.


What I think is very interesting about the rover arriving now is a couple of things--One, Mars is still in Libra.   Mars is usually all about ME and sitting in the sign of Libra is a bit challenging since Libra is about YOU not me.   But then Libra is about relationships and now more than every Mars is profoundly in relationship with us over here on Earth since we have clearly FRIENDED him.

Three, one other tie in with Mars on Saturn---I heard an interview with one of the engineers over at JPL and they said something to the effect, "We are doing big work over here but no one is paying attention because they are focused on gymnastics."

Ah, the Olympics are a bit of ego bruiser for JPL who can't get an audience to save it's life---Ah, how perfectly Saturn.