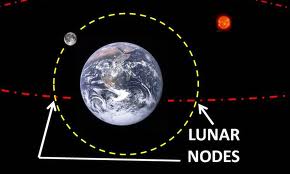 A couple days ago on the 29th the north and south nodes changed signs.   The Nodes are not planets, they are points between the moon,earth and  sun.  The New and Full Moons that are near these points will be eclipses.

The nodes run backwards, as if they are always retrograde and for the last two years the North Node has been in Sagittarius and the South Node in Gemini.   Whatever sign, the north node is in is where we need to stretch, and grow, it is the part of us that karmically move us.  It is not easy and we usually struggle with it but as we grow older and older we become more and more comfortable with our life lesson/purpose and are always rewarded when we stretch.   The South Node is where we are lazy, where we hold karma.  When we DO our south node we are being lazy and we usually pay a price for slovenly behavior.  There is a lesson we learn from our south node.  In order to be healthy we should stretch and do our North node as dictated by sign and house and to really hit a ball out of the park, we stretch with the north node but use the positive skills we have in us innately from the south node.  Of course, if we get lost in our south nodes--well that is when trouble can arise both personally and globally.

I remember during 9/11/01  when all of us where watching the events unfold I was overwhelmed with the knowledge that the North Node was in Cancer.  Cancer is our home, our family, our emotions.  Capricorn is our career, our business our governments.   For the most part, about 95 percent of the people who died on 9/11 died at work some at government jobs (police, fire, pentagon).   There were some people who were returning home from vacations on the 4 different planes but of course many of the travelers were at work.  The World Trade Towers were all workers and of course the same for the Pentagon.  I just thought, "Wow, the Universe is really teaching us to get our Cancer on"  And I hugged my son a little tighter.  He was two months old so you know I was already hugging him tightly.  People made big changes in their life after 9/11.  Family and the life we live them became paramount.  Being slaves to a job was no longer an emotional option.


When hurricane Katrina came sweeping in the North Node was in Aries.  Aries is about leadership, about being fiery, getting out there and taking a charge.   South Node in Libra can be frozen waiting for a partner to step in and take charge.  How many of us watched Katrina and the after affects waiting for a real leader to emerge?  We were desparate for Aries.

In the last two years the North Node has been in Sagittarius and the South Node has been in Gemini (remember the eclipses in June?).    I have been stunned by the level of gossip (Gemini) that has infiltrated all media.  The nonsense with Rupert Murdoch (paying people to wire tap celebrities etc)  came to light during this period.  The lies that are purported out there as 'truth'.   Mind boggling.    Sag which rules education and traveling and detente and religion has been challenged.  No one said that DOING the north node was easy but we still have to do it!  ( Sigh, Syria).

Now, we begin a North/South teeter totter all about Scorpio and Taurus.   I gotta say, real estate and property have just been put in jeopardy (hello, south node in Taurus).   Money and currency will also be tweaked.  I think it is interesting that Ben Bernanke said that The Fed would be putting more money in the system today and the metals shot up.   Yep. Smells like Scorpio/Taurus to me.
Scorpio asks us to jump without a net. It is not just death--it is death with rebirth.   We will see many people take risks AND be rewarded for the risks.  Taurus hangs on and hangs on and hangs on....watch and see the examples of people stubbornly holding on to something.    Probably people holding on to money but not holding on to values.   I'm curious about the Akin in MO.  I wonder if he will still be holding on in the next wee or so.  No matter what,  It is going to be an interesting two years as we process Scorpio and Taurus.   Enjoy the eclipses in November & May!