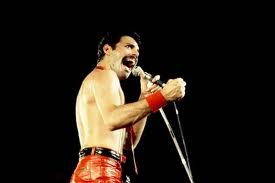 We may have all been asleep when Mercury turned direct but I'm sure we all felt the change.
How is your heart?  How is your passion?  How is your communication?  What have you learned about yourself in the last three weeks.     Are you true-er?  Are you braver?  Did you hide?  Are you hiding now?

Mercury crossed the shadow point on June 27, turned Retro on July 14 then turned direct today/yesterday night.    Now that we are on the sensible side of the period we should see some of the bumps soften and things smooth out.  Of course, we should expect some revisits of things that came up since June 27 to possibly pop up between now and August 21st when we cross the shadow point.   No sense being scared or nervous just a moment or two might come up where we say, "Oh, that thing again, I almost forgot."

And by the way, I thought it was fitting to put up a photo of another Mercury instead of the roman god or the planet for this particular ending of retrograde  Freddie Mercury in red pants red tied, no shirt belting out a song seemed appropriate for Mercury direct in Leo.  I must say I was humored watching the Olympics Opening Ceremonies when there was huge moment to "Bohemian Rhapsody."    And while watching several events I have heard several Queen songs being played during the time outs.  I can only imagine what Mr. Mercury would have thought.   Freddie was actually a  Virgo and had Mercury in Virgo but it was in the first house near his Leo Ascendant.   No, kidding.