Astrologically looking at the Republican Convention 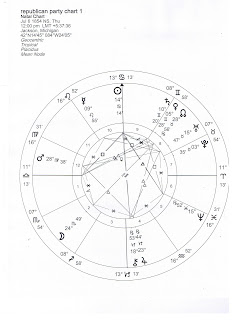 When poking around, it appears  the most used chart for the Republican Party is July 6, 1854 - Jackson Mi using 12 noon.     I can see how that date and location was chosen and you can read more over at Neptune Cafe.

The convention takes place next week and earlier this month transiting Jupiter conjunct natal Saturn in the Rep Chart.   Years ago and I really mean MANY years ago when I was studying astrology I was taught that a conjunction is neither bad (like a square) or good (like a trine) but instead is qualified by the nature of the planets.   Of course as time progressed and I worked more and more with charts I came to my opinion about Jupiter conjunct Saturn and that is it can be a good thing, however it can have a rough first start.  Jupiter has such an in-your-face-energy so much so that  even when he is smiling, he can still push the limits. And of course, Jupiter is so big it has no subtle abilities.

Saturn which likes its rules and orders can get discombobulated by Jupiter's big opinions, big ideas,  big boldness just big bigness.  Also, if Saturn has built its structure on sand, it definitely can sink with Jupiter's big energy.    However, if the foundation is strong and time has passed for Saturn to processe the Jupiter energy, Saturn can figure out how to use the change to its advantage.  Then by the time the transit is over, one often will judge the experience even with its rough start as ultimately a rewarding experience.    Looking ahead, Jupiter is on top of Saturn August 1,  Dec 9 and March 22nd.   What will be decided or declared during this convention that speaks to the weight of Jupiter?  How will it push the boundaries?  Will it curry favor and then success by the time Dec and or March rolls around or will chickens be roosting?

Near the election date Saturn will be opposing Pluto.   This is a tough aspect, seriously, no other way to describe it.   It is an aspect that is usually defined by doors shutting.  Feeling limited with no real options.  An impotent aspect.  But again, after the aspect is over there can be a real re-birth.

And in January (and June) Transiting Pluto semisquare Saturn.  Old habits are very difficult to jettison.  This is a big ol' learning curve.  I remember my own Pluto/Saturn transition. Luckily I knew enough to get out of the way and let Pluto take over and guess what? .I was way better for it. But you gotta be willing to move to side and let Pluto redefine you.  Will be interesting to see how that all unfolds.

There is a beautiful aspect between Uranus and Mercury in 2013 which I think will be very, very inspiring and new thoughts, new thinking, creativity, dynamic--if things are bumpy between now and then GOP should take hope, Uranus will bring something brilliant to the party in 2013.


One other note:    Over at Lynn Koiner, she points out that David Roell' has argued for another chart for the Republican Party.  I think it is very thoughtful and encourage you to give it a read.  http://www.lynnkoiner.com/astrological-tidbits/new-horoscope-for-republican-party

If you do not receive Dave Roell’s weekly e-zine, do yourself a favor and sign up. Last week he wrote an article on the chart for the Republican Party.
A meeting was held in a school house in Ripon Wisconsin on Feb 28 1854.
Since school was in session, the meeting had to be held after 3pm, probably much later, after day work and dinner were completed.
The meeting could not have been held before 7pm but Dave uses 9pm. He has the chart calculated in his September 6 publication. Cut and paste this Link, as I cannot make the links “live” for some reason.
Dave replied: “I set the chart for the presumed conclusion of the meeting, not its start. Just as the 1776 chart is set for the climax, not the opening gavel. “
Posted by Tracy at 12:07 PM