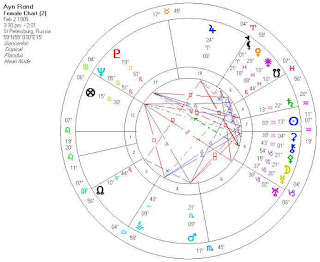 Good gawd the long dead Ayn Rand has been in the news of late.

Honestly, I have not thought much about her since I read FOUNTAINHEAD and ATLAS SHRUGGED in college.  Interesting books, jillion pages long and I remember I enjoyed them.  Then I got on with my life.  I do recall some of my peers who were looking up at Reagan with hearts in their eyes seemed a bit more attached to Ms Rand than me.  But also, she was still alive when I read the books.  Now she's been dead 30 years and like other artists, she is even more popular as a dead writer than a living one.

I went poking around assuming that someone had put up Rand's chart and of course there are many links.  Even a cursory search will find several.

Here is one on OhioAstrology


Here is one on Rand over at Karmic Astrology.

For your scorecard.
She was an Aquarius ( Rebel, rebel)
Moon in Capricorn (Cold for sure but also appealing)
And possibly Leo rising.

Lots of charisma in that chart.  No joking.  All of it can be very appealing. Especially for Ronald Reagan who was an Aquarius.    Libertarians are fully engaged by her charisma and I would say in particular her Cap moon they like tremendously.

For me I have to say the hypocrisy of Aquarius,  Leo & Capricorn shows up big time when we consider the fact that she was life long smoker who did not believe cigarettes contributed to lung cancer (probably the inability to quit was hurting her ego).  She was adamant against social services yet she did collect medicare to cover her medical costs.  What would John Galt say?

Also, I felt her Cap Moon when I read about the emotional complications of her personal life (WOW)

and definitely when I read about her funeral---A six-foot floral arrangement in the shape of a dollar sign was placed near her casket.[