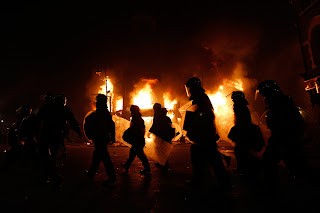 While all the economic nonsense has been going down and down and then up today and probably down another day or whatever.. but while all that was happening and sucking up a lot of news, there were other events in England drawing a lot of attention.

The riots in London started happening this weekend. If you haven't been following it, here's an update


Interestingly, I received a thoughtful comment from Janey in the UK.


Hi Tracy - never commented before but wanted to say that your description of 8/9 (and this whole week really) seems spot on from my position here in London, UK. Not sure how much it's being talked about in American news, but there have been senseless riots here for a couple of nights, escalating to an enormous degree last night. The riots are all started and perpetuated by young people - 'angry childlike' people if you will - and many, many shops have been smashed, looted, and burnt. Your reading of this week's stars seems so fitting!


And today while Mars is Squaring Uranus Blackberry has been put on alert---which is perfect Uranus!


There were calls today to shut down the BlackBerry Messenger service which is thought to have played a key role in helping mobilise looters involved in the riots across London.
Mike Butcher, a technology journalist and digital adviser to Boris Johnson, said it was 'unbelievable' that the BBM service had not been disabled.

Messages on the service, along with posts on Twitter, helped spread the locations of riots like wildfire and brought hordes of teenagers together to attack neighbourhoods throughout the weekend.