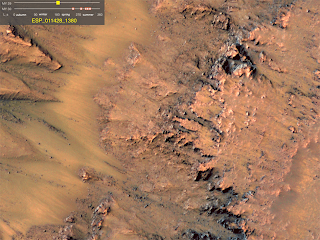 Cue the mysterious violins. Cancer is a water sign. Uranus in Aries continues to explore new territories. Neptune is still in Pisces, a water sign and an out of this world sign (he goes into aquarius late tonight) and what did Nasa announce today???? They think it is possible that Mars has water. This is big news. I swear.


The scientists said the best explanation they could offer for the streaks was that they were caused by a flow of extremely salty water down the slopes. The salts, which have been detected all around Mars, would allow the water to remain liquid at much colder temperatures than pure water.

However, the scientists said, they have yet to fill all the holes in their story. They cannot, for example, explain how the water darkened the soil. They are also at a loss to explain why the streaks vanish each winter.

But, Dr. McEwen said, “We haven’t been able to come up with an alternative that we believe.”

The streaks have been definitively seen in seven locations and tentatively identified in 20 others. “The sites where these occur are rare,” Dr. McEwen said.

Scientists have known for years of vast swathes of frozen ice on present-day Mars. Many geological features like canyons, dried-up lakes and river channels point to the flow of liquid water in the distant past when Mars may have been warmer. Back in 2000, images taken by the Mars Global Surveyor spacecraft showed fresh-looking gullies, which some scientists hypothesized had been carved by water. More recent looks indicate that they were more likely cut by carbon dioxide frost.

However, the areas where the dark streaks occur, located in the southern midlatitudes, are too warm for carbon dioxide frost.

“I think this is best evidence to date of liquid water occurring today on Mars,” said Philip R. Christensen, a geophysicist at Arizona State University
Posted by Tracy at 3:32 PM