Scandinavia in the news 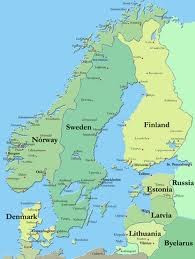 Norway, of course was in the news two weeks ago. And in the last two days there have been a few more stories to come out of the area, in this case Sweden and these are...well curious. This first one has Neptune retro in Pisces entering Aquarius written all over it.


An ocean exploration team led by Swedish researcher Peter Lindberg has found what some are suggesting is a crashed flying saucer.

Lindberg's team, which has had success in the past recovering sunken ships and cargo, was using sonar to look for the century-old wreck of a ship that went down carrying several cases of a super-rare champagne. Instead, the team discovered what it claims is a mysterious round object that might (or might not) be extraterrestrial.


Lindberg's interest is primarily finding old champagne and wine in shipwrecks. Not UFOs. A few years ago when Uranus was in Pisces there were some amazing finds of old champagne in 18th century wrecks and even Shackelton's whiskey was found in the ice of Antarctica. Pisces is booze and shipping (of course) and Uranus is as weird as it can get. Drinking a two hundred year old Champagne is pretty unusual event.

Richard Handl told The Associated Press that he had the radioactive elements radium, americium and uranium in his apartment in southern Sweden when police showed up and arrested him on charges of unauthorized possession of nuclear material.

The 31-year-old Handl said he had tried for months to set up a nuclear reactor at home and kept a blog about his experiments, describing how he created a small meltdown on his stove.

Only later did he realize it might not be legal and sent a question to Sweden's Radiation Authority, which answered by sending the police.

I have to say with Uranus in Aries square to Pluto in Capricorn between now and 2016 I expect a lot of interesting, curious and wild times---but never did I think a man would try to build a nuclear reactor in his apartment. Uranus is strange but even that one was out of my orb.

BTW: I predict he will not be getting his security deposit back.
Posted by Tracy at 8:00 AM