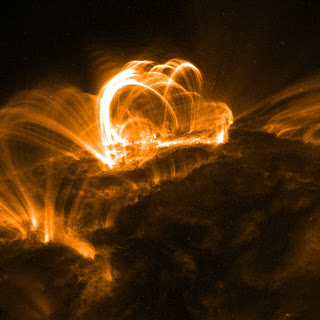 Thanks for the heads up, to David Crook's site where he posted an interesting Reuters story.

Sunday, August 14, 2011
Did space storms drive us mad?
(Reuters) - Rollercoaster financial markets and the worst riots Britain has seen in decades have made it quite a week for a time of year that is usually so dead the newspapers are filled with "silly season" tales of amusing pet antics.

Everyone is pointing fingers- at blundering politicians, hooded thugs, disaffected youths, bumbling police and greedy bankers- but could the cause for all the madness really be the star at the center of our solar system?

There isn't a lot of evidence pointing to little green men involving themselves in Earthly affairs, but the sun has been throwing bursts of highly charged particles into space in a phenomenon known as coronal mass ejections or CMEs.

Three large CMEs prompted U.S. government scientists to warn of solar storms that can cause power blackouts and the aurora borealis, or northern lights, caused by disturbances in the Earth's atmosphere, have been spotted as far south as England and Colorado, NASA said.

"Earth's magnetic field is still reverberating from a CME strike on August 5th that sparked one of the strongest geomagnetic storms in years", website SpaceWeather said.