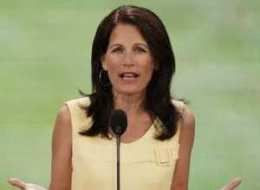 So, Michelle Bachman won the Iowa Straw Poll last week. I don't know what this actually means at this point but it is certainly a good enough time as any to take a look at her chart.


I found a posting by Mary Plumb from Mountain Astrologer who drafted Michelle Backman's chart. I knew for awhile that Michelle is an Aries. And truthly before I saw her birth data I had said to my husband that I thought she had a pronounced Aries. It is most likely her Moon is in Aquarius, apparently there is a question about her birth time so, Mary went ahead and drafted it for the morning but I don't believe she has Aries rising.


Mary wrote up a piece which talks about Michelle's chart in comparison with the USA chart (as drafted by 18th century British astrologer Dr. Ebenezer Sibly).

Here's a snippet but you can find the whole article over here on Mary's blog.


The Sibly Moon is at 27° Aquarius with Pallas Athena at 26° Aquarius. The Moon was in Aquarius until 11 p.m. on Bachmann’s birthday; her natal Moon is somewhere between 18° Aquarius and 1° Pisces. (I am assuming an Aquarius Moon herein.)

Bachmann’s Pallas is at 23°Aquarius; for most of the day it was very close to the Moon. Pallas shows the strategist, the one who recognizes patterns and has creative intelligence.

Radical means, “of or going to the root or origin; fundamental” or “thoroughgoing or extreme, especially as regards change from accepted or traditional forms: a radical change in the policy of a company.”

She has been educated by the radical theocracy of a sect within Christianity known as Domininism, which believes that “Christians have a God-given right to rule all earthly institutions.” (4)

Bachmann has at least one very strong tie to the Sibly chart: her natal north node is at 10°59’ Sagittarius conjunct the Sibly Ascendant at 12°21’ Sagittarius.