No Surprise on S&P report 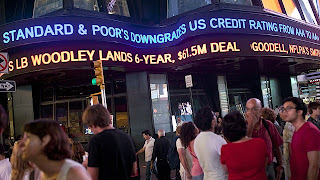 They said they might do it. And yes, they did it.
Standard & Poor's a rating agency, downgraded the United States credit rating to Double AA plus from its sterling triple A.

The credit rating agency on Friday lowered the nation's AAA rating for the first time since granting it in 1917. The move came less than a week after a gridlocked Congress finally agreed to spending cuts that would reduce the debt by more than $2 trillion -- a tumultuous process that contributed to convulsions in financial markets. The promised cuts were not enough to satisfy S&P.

The drop in the rating by one notch to AA-plus was telegraphed as a possibility back in April. The three main credit agencies, which also include Moody's Investor Service and Fitch, had warned during the budget fight that if Congress did not cut spending far enough, the country faced a downgrade. Moody's said it was keeping its AAA rating on the nation's debt, but that it might still lower it.

As you see from my previous posts, the astrology was there for something like this to happen. A nasty wounding was coming.

As pointed out by a commenter, Mars is going over the exact points of last summer's eclipse in the cardinal climax. During that tense summer the rhetoric by political candidates was clear, by this summer, many of those same politicians were saying, "Maybe it is okay if the US defaults." And that was our July in DC which led part and parcel to this rating by S&P.

What is this new rating, which by the way puts the US with New Zealand and Belgium on the same level, going to do to the stock market tomorrow? Hard to imagine it will be good.

Many people have rightfully pointed out that S&P is the same group who got it SO wrong with their ratings of the toxic assets a few years ago. Yep, they were totally wrong and aholes on those reports. But this news coupled with Italy and the other countries (Spain & Portugal) needing their own bailout from the EU we'll know more tonight when the Asian and European markets open. But let's face it, this tension between Mars and Pluto's square on the 11th is grinding on our economies like a dentist who does not believe in Novocain.

And before it gets there, Mars will square off on Uranus on Tuesday. Maybe a UFO will land in the rose garden and take our attention off the big ass wound.
Posted by Tracy at 9:48 AM