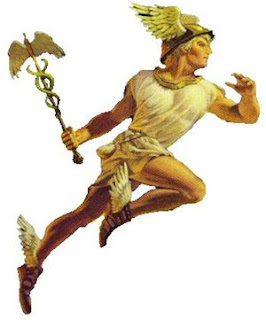 Mercury turns retrograde at 11:50pm (EDT) 8:50pm PDT. My own take on Mercury's reversal can be found in my new moon article. But I was poking around and found a nice write up on Mercury Retrograde from this astrologer's sight: Julie Simmon's.

Here is the link to her blog and write up. I encourage you to read the whole piece. But here is a snippet.


The actual station on August 2nd is loosely opposite Neptune who will be leaving Pisces and returning to Aquarius for one last fling on August 4th. Neptune will not return to Pisces again till February 4th.

The interesting thing about this is that the actual opposition is not exact until August 8th and will be in 29 degrees of Leo; bringing out the 29 degree theme once again. (The theme of the end of the end but not quite the beginning of the beginning. Chaos, change and revolution. This theme has been strong at least since at the eclipse on the Winter solstice.)

These factors suggest that our retrograde experience might have something to do with the need for radical change in the ways we think as well as the things we think about. The last degree of Aquarius is a difficult transition because Aquarius is a sign, more than any other, that likes to hold on to it’s way of thinking. Whereas Pisces is about letting things be just as they are. You can see that Aquarius needs Pisces because it can be too attached to ideas and ideals and Pisces follows Aquarius because a well cultivated mind prepares us to let go with awareness rather than ignorance.
Posted by Tracy at 8:30 PM