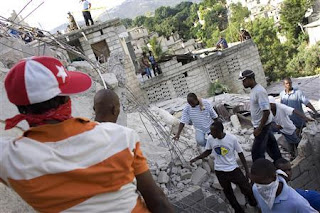 I started getting emails from friends last month that basically went something like this, "What is going on with all the earthquakes--is there an astrological reason?"

So, clearly it was on everyone's mind when Haiti happened yesterday.

For me, my antenna went up when Saturn moved into Libra and began it's first (of 3 squares) with Pluto on November 15. Those are two tight warriors and although Libra is an air sign, Pluto in Capricorn is an earth sign and it does crack and destroy. You can find a lot written about earthquakes and planets. Uranus, Neptune and Pluto usually seem to be in the mix. If not all three perhaps one of the three and then there can be a Moon aspect. About a year or so ago I posted about Supermoons and their sometimes tie into earthquakes. Fwiw, Friday is a solar eclipse.


Here is an interesting article about various earthquakes and astrology.

I don't know if we ever can predict them. I suppose at the very least we can say there might be an astrological weathercast for them but then is that helpful? I dunno.

Anyway, as I write here from the lip of the San Andreas, I guess it can't hurt to get some water just in case. In the meantime, I will make a donation to OperationUSA which I have posted here before (on one of the other quake disasters) as being an excellent resource of AID.

But back to Pluto in Capricorn---is there really any reason for a country surrounded by so much wealth to have such poorly built buildings? Really? This begs the question...why did that happen?

No answer now. But then Pluto will be in Cap for many years and we'll have all that time to figure this out. And for what it is worth, the last time Pluto was in Cap was over two hundred years ago, after it did what it did...Pluto went into Aquarius and we got the French Revolution.
What will it do this time?
Posted by Tracy at 1:58 PM