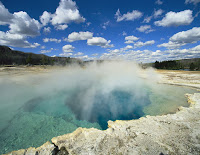 That’s more than half the total annual average in the park — 1,600 a year. Last year, a swarm of more than 800 quakes near Yellowstone Lake was recorded in late December and early January. All told, more than 1,650 earthquakes were recorded in the park in 2009.

I highlighted the interesting part--last YEAR, 1,650 quakes---and in ONE week, 1,000---
Let us hope THIS has nothing to do with a Supervolcano which would then explain the Cardinal Climax, wouldn't it?
Posted by Tracy at 11:24 AM